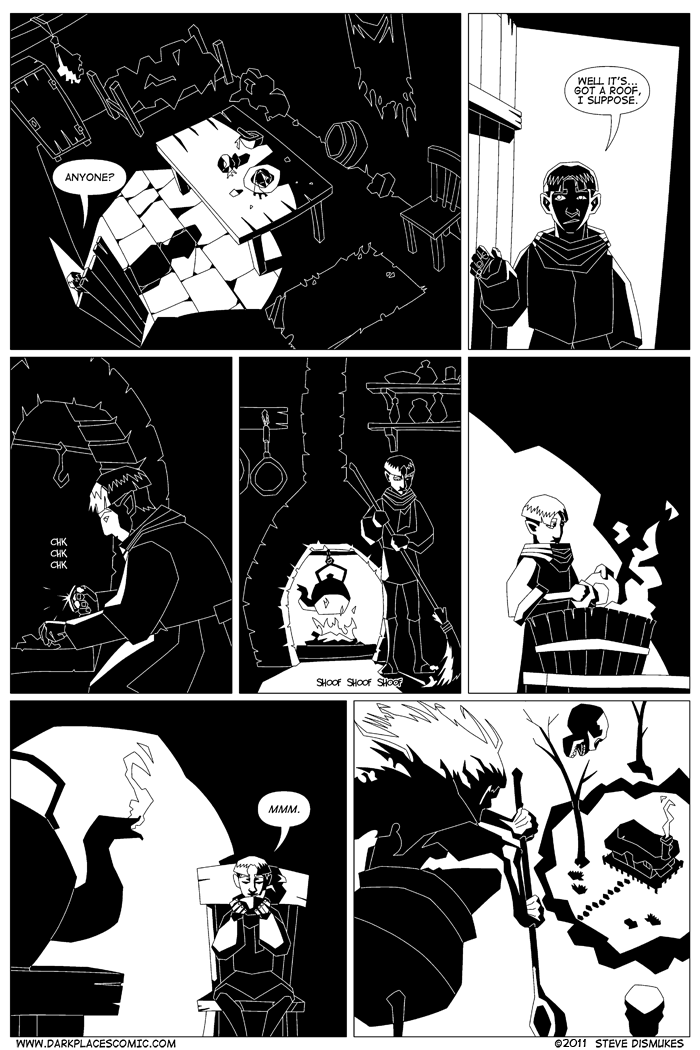 Because I live in mortal dread of being called out by people who know more about Genuine Historical Things than I do, panel 3 took a fair bit of research to get right. This mostly entailed watching YouTube videos in which manly outdoorsy types make fire using nothing but flint and steel and gutsy determination.

I suspect their backup firestarting methods involve either briskly rubbing bits of wood on their rugged chin-stubble, or glaring at the tinder until it ignites out of shame at its own wretched inadequacy.

I’ve read about witches using all sorts of household appliances for flight, but everyone always goes for the boring old brooms. Glad to see you break from the mold.

Yeah, old-school witch folklore had them using… well, pretty much anything to fly around on. Milking stools, cooking pots, whatever, it’s all magic. 😀

Allthough the pop-culture witches fly around on brooms, the one witch wich comes to my mind when I think of witches is the russian version of Baba Yaga, riding around ona giant mortar, while steering with the pestle.
She only uses the broom (made out of silver birch for those interested) to sweep away her tracks.

Cauldron and spoon thus works for me xD

The Bog Witch is quite heavily inspired by Baba Yaga stories. She doesn’t have the chicken-legged house, but she’s basically the same “scary old lady who lives out in the wilds” archetype. 🙂

Though I’ve camped quite often, I’ve never managed the start-a-fire-on-a-wish-and-a-bit-of-friction. I resort to paraffin-soaked friction matches the size of my thumb.

Now my MOM could do the glare-until-it-does-what-it-knows-is-right thing. Even glance could leave scorch marks. 🙂

I think that is a superpower that comes with the motherhood package. 😀 I was the go-to guy for making fires when I was a Scout, but I still used matches to get it started.

Apparently the big secret for making fire the old-fashioned way is to use something called charcloth – cotton or linen that’s been heated in the absence of air so it becomes a kind of fabric version of charcoal. Almost pure carbon, catches sparks very easily so the flame can be transferred to grass or whatever other kindling you have.

I’ve had a go at doing fire from sparks a few times, and the major impression I’ve got from it is that it is a right bugger to get right. However, there are some things that I’ve found to work well. First off, there is a plant that is the absolute best thing ever for getting a fire going. It is called Clemitas, or Old Man’s Beard. It is basically everything you need to start a fire in a single plant. Specifically, the outer bark peels off without harming the plant, and when dried catches easily from a flame, but has enough meet to light small sticks (I prefer dried spindly alder branches, but anything small enough is good. Pencils size first, then going up from there). the other really useful part is the I think they are the seeds, but basically, they are fluffy and on the ends of the plant. They catch sparks really well, and produce a nice flame. It’s basically natural cotton wool, and very good for starting fires.

However, the Old Man’s Beard burns in an instant, which makes it a real awkward bugger to use. Instead, what I find really good is a strip of birch bark. this is lovely stuff, and again, peels off without harming the tree. It can be a bit of a bugger to get going, but it burns well and with a large flame, and is very nice to use.

If I was trying to start a fire with flint and steel (all my experience at fire from sparks has been with a swedish firesteel, which is a lovely piece of kit and burns a lot hotter that sparks from steel) I would probably drop the sparks into a clump of Old Man’s Beard with a strip of birch bark in it, under some Clemitas bark. In theory, this should light well and keep going well enough to get a fire going. In pratice, something would go wrong and I’d probably grab a lighter to get it started.

Grass I’ve never tried using, but hay burns horribly, and unless the grass was really well dried I don’t give it much better chances of working. Straw works quite well, but dried leaves are absolutely horrid. They start well, but then die off and need a lot of blowing to actually start a fire.

I haven’t really tried charcloth or anything such as King Alfred’s Cake that creates a glowing ember, but I have seen someone do firelightling from friction, and from what I could tell, going from ember to flame is actually a lot of effort. Personally, I’d stick to the things mentioned earlier.

…And that was a far too long post. I know far too much about this subject.

I knew it. I *knew* it was a Baba Yaga sort of hut! Perfection.