Work on the next chapter continues apace, and I’m aiming to kick things off next week. In the meantime here’s a random bit of scenery from the world of Dark Places. 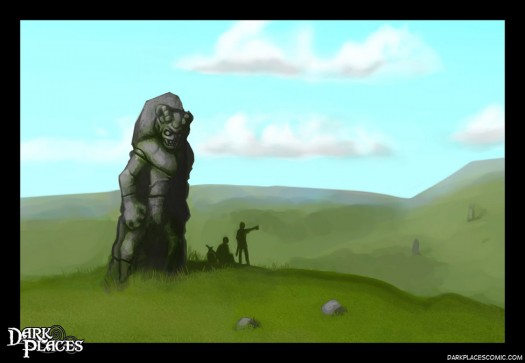 High in the Plains of Gwethyas, travellers wandering from the King’s Road may encounter what looks to be a strange outcropping of rock, grown over with lichen and heather. Many such stones lie fallen and half-buried across the rolling landscape, but enough still stand to trace the outline of a massive circle fully ten leagues across.

No one knows who brought the stones to Gwethyas, only that they are incredibly old – ancient when the Fey Courts raised the rings and avenues of Kollmoor to serve as gates for their armies, long predating even the hilltop caer-tombs of Koghbrannow. That many of the stones are worn smooth by time and exposure only hints at their vast age, as no tool forged by man or dwarf can mark their surface. Despite this many of the stones still bear carvings of grimacing figures, hunched and threatening.

The hardy folk who graze horses and cattle on the plains shun the lands bounded by the “Gurnstones”, claiming it to be a blighted and unclean place. They refuse to take their herds within sight of the stones, as any animal straying into the forbidden region is abandoned, or even driven off should it attempt to return.